If you are driven by destinations that trigger the mystery buff in you, we have a range to suggest. There are more weird places to visit on earth than you think exist. Till now you may have only heard about Bermuda triangle and it is the most unique phenomenon scientists are trying to investigate.

But there are places more mysterious than Bermuda triangle scattered across the globe. How about high energy Ayers rock in the outback of Central Australia? For that matter, twisted trees in Slavic Europe, the eerie Transylvanian valleys or the Hotel in Banff infamous in Stephen King’s works are all shrouded in enigma.

An enigma associated with the thread of fear element. So if you are an alien buff or a UFO tracker or turned on by tales of ware wolves and vampires, our selection of destinations would inspire you to visit. Set out to explore the strangest tourist spots or reach destinations that give a feeling of forebodings. 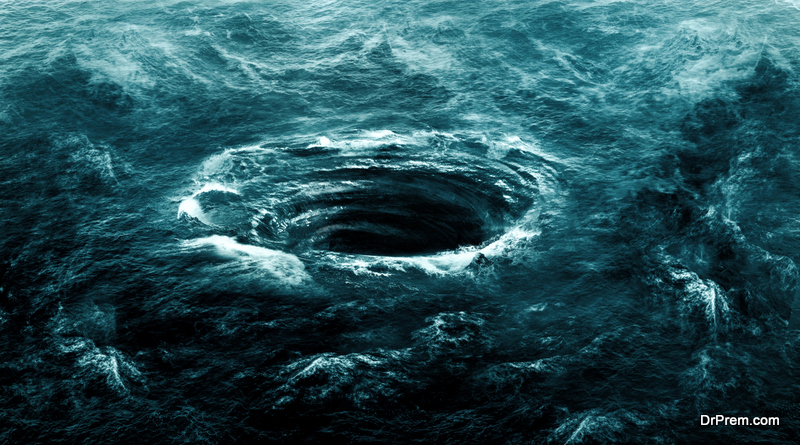 Let us start with the mysterious triangle in the Caribbean that is linked to episodes of missing aircrafts and ships which is history now. A powerful energy field is believed to exist that sucks in people, planes, ships and anything of other dimensions. It stretches across half a million square miles of the baffling sea.

Mysterious events lead to naming this region as the Devil’s triangle. Unsolved puzzle of disappearance has turned legendary. Nevertheless, despite its evil connotations, Bermuda triangle is well worth a try. Today’s Bermuda is a coveted tourist spot. Sun-bathed islands of Turks and Caicos in the south and coves of Bermuda in the north is a powerful tourist attraction for sure. 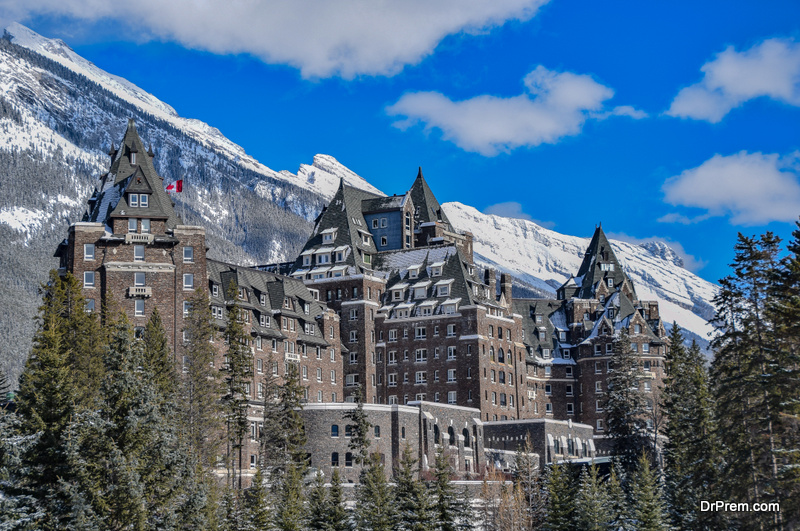 This hotel has become infamous from two sources and both are high potential sources. The first comes from Timberline Lodge, the film adaptation of Stephen King novel. King himself is a compelling author of horror and supernatural fiction. The second one is from Stanley Kubric directed and Jack Nicholson acted horror movie The Shining.

The movie featured this hotel, recalling its dubious history of mysterious incidents and the presence of supernatural power. One story narrates the brutal murder of an entire family in the Hotel’s room no 873. Perhaps the frightening enigma is more mysterious than Bermuda triangle.

Well if these spooky details throw a challenge to the daring entity in you, this is the place to visit. Complete with Scottish Baronial architectural design, it is perched on the Canadian Rockies with fir trees elevating the landscape beauty. After a night of chill and thrill, you have skiing fields of Jasper and Banff for joyous exploration. 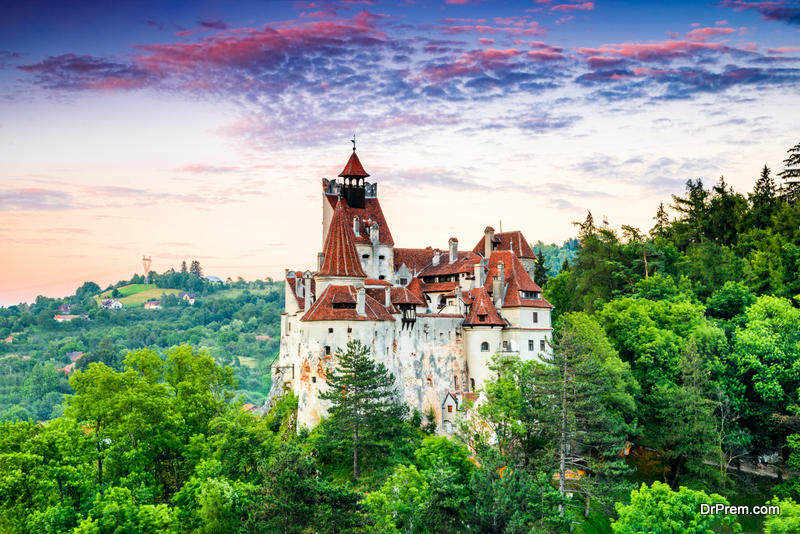 This region in east Europe echoes evil off its mountain slopes, valleys, creeks and castles. The presence of evil can be literally felt and heightened by tales to tremble by. Vampires, werewolves and Count Dracula, the most brutal and bloodthirsty among Wallachian counts of Romania have made it to the helm of mystery and horror.

Towns of Sibiu, Brasov and Cluj strongly hold superstition of undead creatures out for human blood during the night. Church bells can be heard as you travel, ensuring protection to god fearing people dwelling in scattered hamlets. The spot of tourist attraction is the Bran Castle, a turret-topped Fort rising from the forest on the fringe of Wallachia. Highlights of this castle are Gothic Towers and roofs with evil faced Gargoyles. 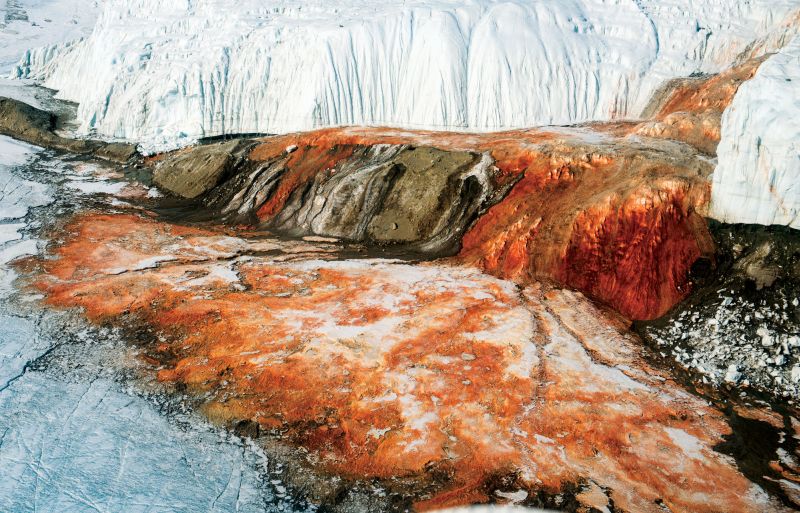 This is in faraway Antarctica and the water from blood falls empty into Mc Murdo Dry Valley. Scientists come forward with a theory that red algae or some other bacterial species present in water impart the color. What is baffling is how any life form could sustain in such a freezing temperature!

Another unusual phenomenon going against laws of science is the existence of flowing water in a continent which is supposed to freeze to stationery status. However, this is more mysterious than Bermuda triangle if you think of the scientific oddity. But this place has certainly a tourist appeal for inquisitive minds. 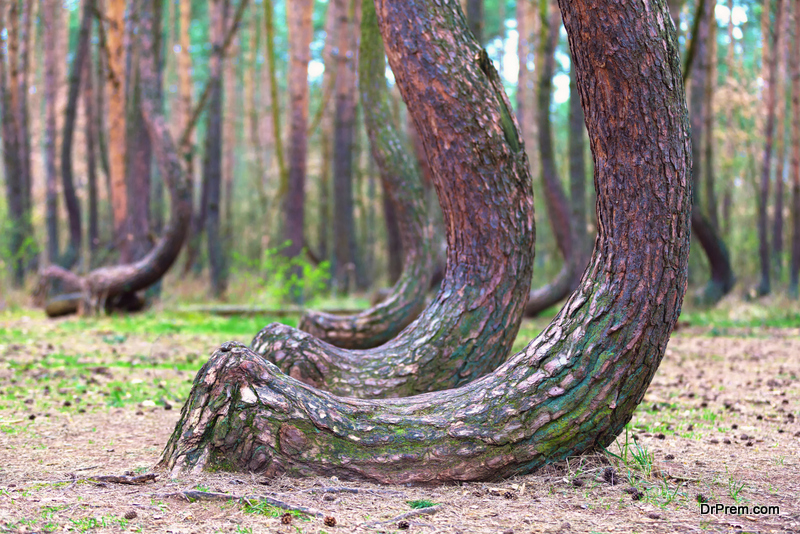 This Polish pine forest of unusual shape is one of the strangest tourist spots to visit. The most unique feature of the trees which were sowed around the 1930s is its twisted shape. This region of Poland was under German land jurisdiction when the trees were planted. The trace of planters and reason for planting are still unknown.

One belief goes some artificial device has a role twisting the trees in a strange fashion. Another theory holds a powerful snowstorm is responsible. Whatever may be the reason, this is surely one of the weird places to visit.

The Lines of Sand, Nazca, Peru: 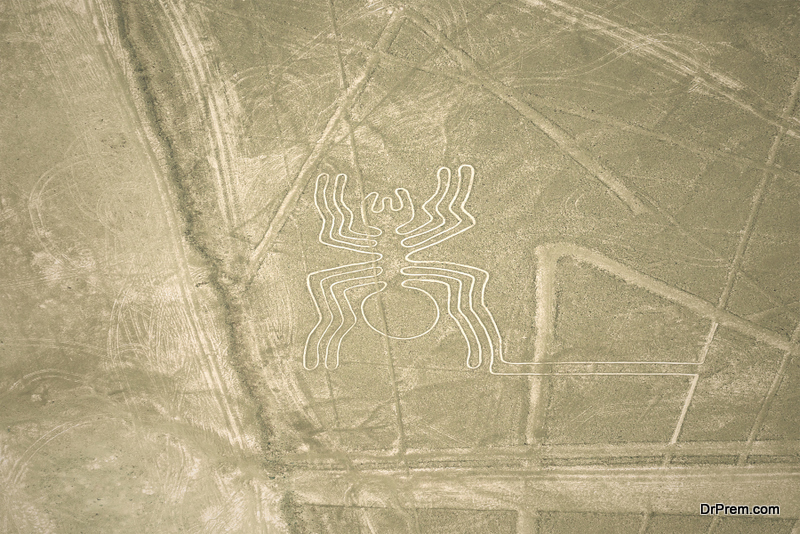 The Nazca lines lying in Southern Peru across the arid desert is ideal for inquisitive minds. It has ruins of the most mysterious and amazing pre-historic relics in entire South America. Once you take an aerial view, the sightings become pronounced which you cannot see from the ground level.

Faint lines etched across the sand take different shapes of birds, animals, plants and bizarre geometric patterns. The site spanning 1000 square kilometers is declared an UNESCO world heritage site. Were they depicted by the ancient Nazca population as an offering to supernatural powers? It is clad in mystery.

Everyone is welcome in Roswell, New Mexico, even aliens: 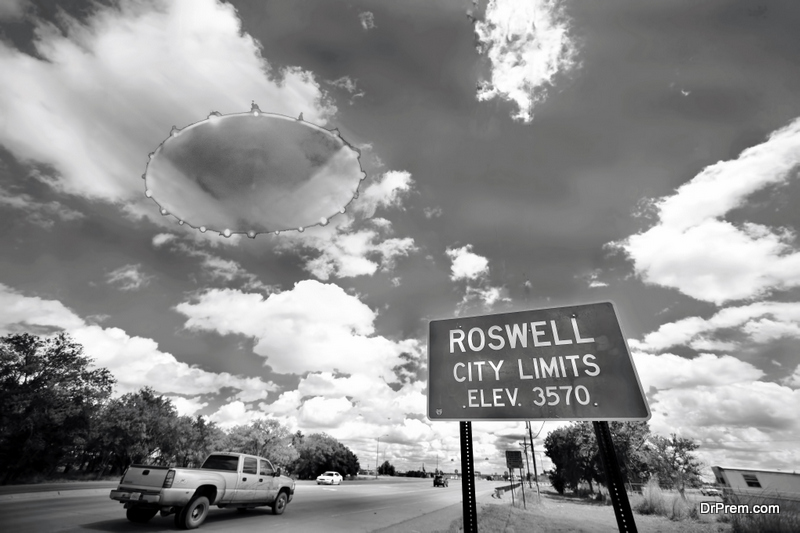 This is an Alien themed town in New Mexico. We may call it more mysterious than Bermuda triangle. The legend goes and seriously held by scientists and UFO buffs that in the summer of 1947, an extraterrestrial flying saucer had crash-landed on outskirts of the city.

All its alien crew was on board when the accident happened. There is a counter theory that nothing of the sort happened. But Roswell had turned into a famous tourist spot frequented by UFO researchers and inquisitive tourists. International UFO Museum and Research Centre and Alien inspired memento outlets exist to keep you happily connected to the extraterrestrial world. 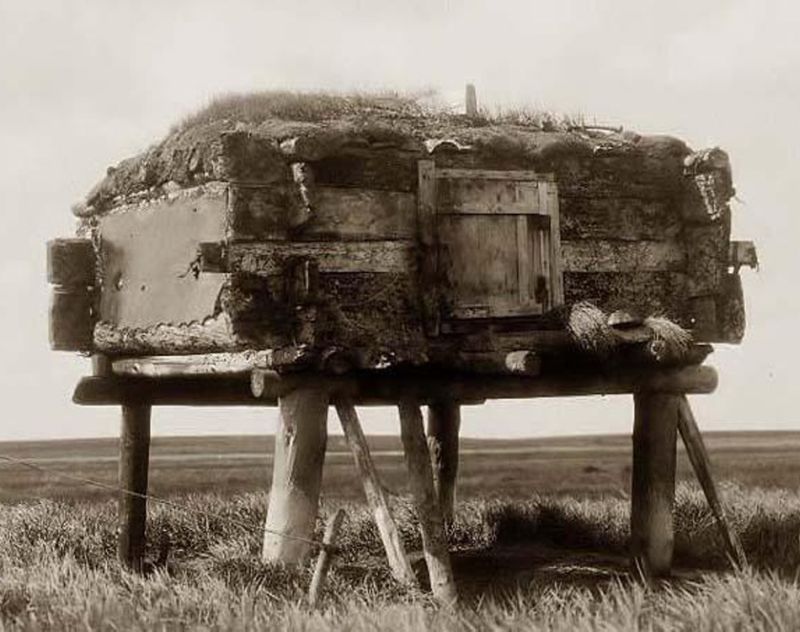 This Canadian enigmatic destination is more mysterious than Bermuda triangle in its own right. What is shocking is an entire village of 2000 inhabitants melts into thin air overnight. Involvement of Lake Anjikuni and invisible hands of aliens may be at play. They had decided to engulf an entire village and teleport it to some unknown dimension.

Joe Labelle, an animal trapper was aware of this Inuit village and had a mind to visit it. Upon arrival, he had the shock of his life, the entire village went missing. Food and guns were untouched as if Aliens weren’t interested in these. This place is worth a visit. 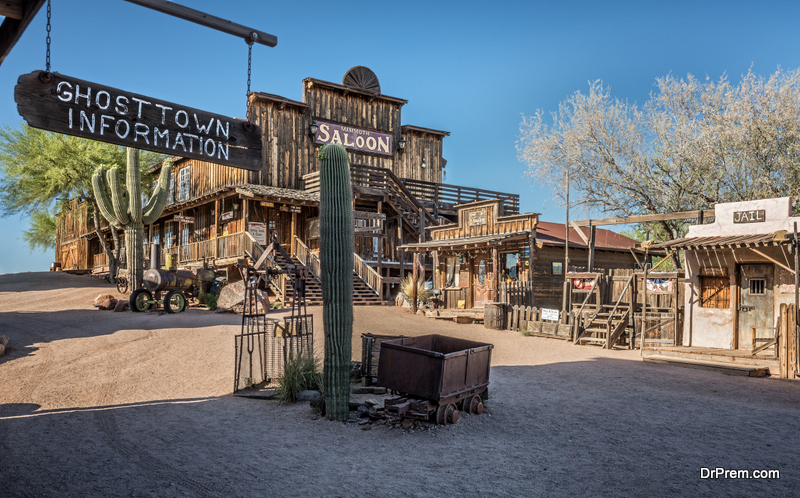 So far as the myth goes, a man called Jacob Watts struck it big when he discovered a gold mine in the Superstition Mountains. He chose to keep it a secret until he could claim sole right to the enormous wealth.

What followed is definitely more mysterious than Bermuda triangle as the mine was never found despite geological explorations. Some say the mountains are too dangerous as they are haunted by spirits of the dead who all went in search of the mine. Another opinion says gold mines are guarded by mysterious Tuar Tums, meaning little people.

The Pyramids at Giza, Egypt: 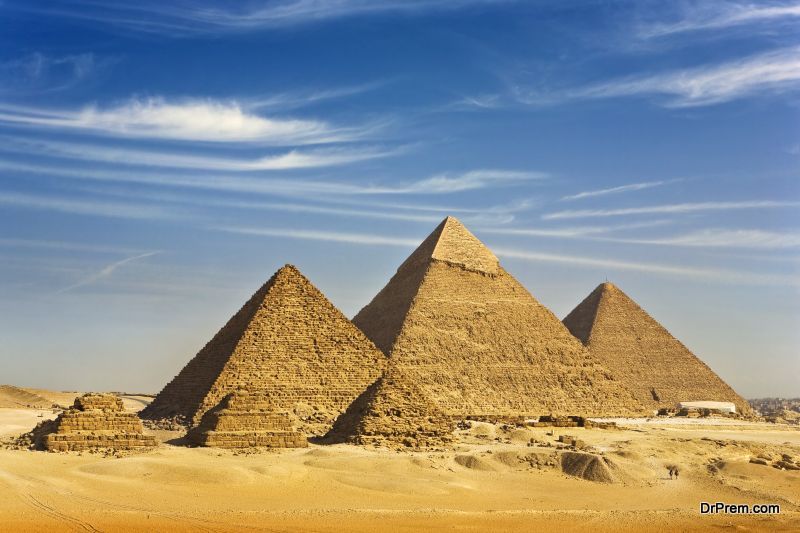 Perhaps nothing beats the Egyptian pyramids built under the reign of pharaohs when it comes to mystery. These ancient structures are way more mysterious than Bermuda triangle itself. The first question that confounds us is the huge stones used for construction. How were they transported to the site and from where? What mechanical equipment was used to erect these stones through such great heights?

The huge treasure enclosed within the tombs inside the pyramids is no less mysterious. Whoever touches the riches is certain to invite the wrath of the dead. This is a story of prodigious engineering achievement back in time blended with spine chilling tales of curses, enigma and death. All of it is connected with violating the unwritten code of taboo on entering this magnificent manmade structure.