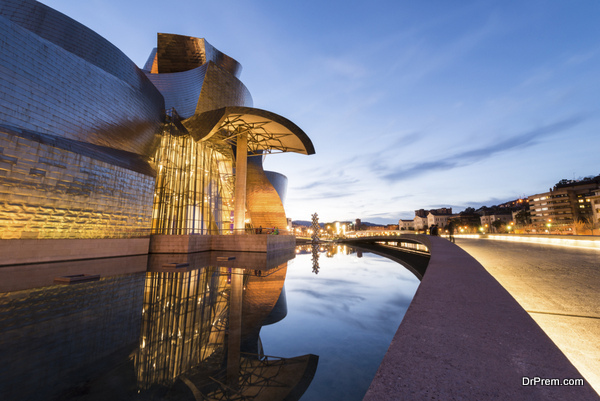 New York City has plenty of landmarks that will excite architecture buffs. If you have limited time, focus on these four examples of New York architecture.

The Flatiron Building is one of New York City’s most iconic pieces of architecture. Most people recognize the building because of its odd triangular shape which comes from New York City’s competitive real estate environment. In a city where real estate is at a premium, the original owners decided to invest in a triangular island.

Burnham’s approach to designing the building prompted some critics to jokingly rename it Burnham’s Folly. They did not believe that the unique approach offered enough stability for the building to last.

The Flatiron Building, along with many other buildings and hotels in New York, is registered as a New York City landmark and listed on the National Register of Historic Places. It became recognized as a National History Landmark in 1989.

Frank Lloyd Wright’s Modernist designs stand out for their unique appearances. Few, however, are as easily recognized as the Guggenheim Museum in New York. From the outside, the building looks like a large cone resting on a flat pedestal. Inside, Wright eliminated most stairs by creating a continuous spiral leading from floor to floor.

Wright usually tried to create buildings inspired by nature. That aesthetic isn’t immediately apparent in the Guggenheim museum. A closer look, however, shows that Wright did as much as he could to remain true to his ideals. The galleries, for instance, are divided like cells in a citrus fruit. Wright also chose a location as close to Central Park as possible. He wasn’t thrilled about the building being in New York, but he made the most of it.

Frank Gehry is known for making buildings with designs that often defy explanation. The IAC Building is quite tame for a Gehry design, but it stands in stark contrast to the corporate buildings surrounding it. Even though it doesn’t look as radical as some of Gehry’s buildings, it does have an interesting shape that looks vaguely like a series of curtains hanging together.

41 Cooper Square is new academic facility owned by the Cooper Union. Thom Mayne of the architecture firm Morphosis designed the building to house classrooms, studios, laboratories, and other useful spaces.

The building has a unique exterior and interior that makes it appealing to architecture buffs. Many will also appreciate that 41 Cooper Square has LEED Platinum rating, meaning it has significant green features that make it sustainable.

These are just a few of New York’s iconic landmarks. Can you think of others you’d add to the list?

Three Considerations You Might Be Overlooking When Moving Abroad