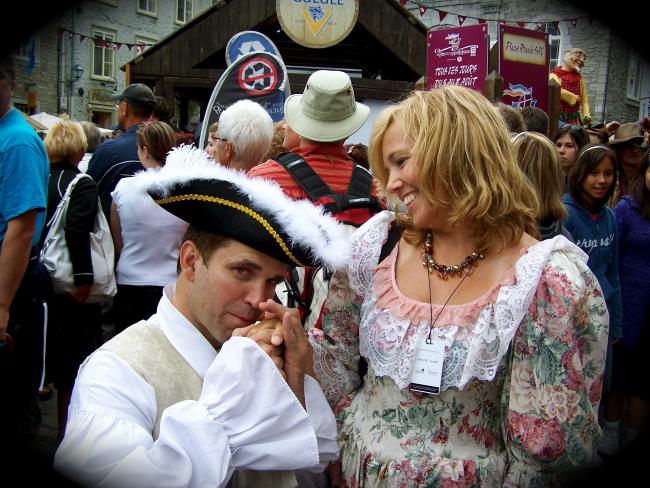 Ordinarily, I don’t do costumes.

When Hallowe’en comes, I’m the one who’s happiest to answer the door, hand out the candies and admire what everyone else is wearing.  I might wear orange and black in honour of the evening, but it will be my own orange and black clothing – nothing rented.

Rented costumes tend not to flatter – mostly because they’re made to fit a variety of bodies and none of them very well.  They also have a disconcerting tendency to smell of other people’s deodorant – and worse.

So when I was invited to be a part of the New France Festival, a celebration of the founding people of Quebec, held in Quebec City each summer, I had my reservations – mostly because of the reservations I had to make for a costume.  “Take the following measurements,” the instructions I was given read, “and send them to the costumers.  They’ll have an outfit custom-fitted for you, waiting for your arrival.”

As I wrestled with the measuring tape, I felt absolutely certain the system wasn’t going to work.  Stretching and contorting to get an accurate gauge of my waist, hips and bust was a challenge – and I was anything but sure that I’d done a good job.

Oh well, I thought, if the outfit didn’t fit, it wouldn’t be the end of the world – I could still have fun.

And I would have, I’m sure, but without the beautifully tailored, 17th century style gown that awaited me on my arrival in Quebec City, I’d never have been able to experience the history and the grandeur of the era.  I’d never have marched in the parade, through the old city, feeling like a regal lady of the day – and a modern day celebrity too – and I’d never have had my photo appear in a Quebec City newspaper.  Ah the glory of it all – turns out, it was well worth taking those measurements.

Far from uncomfortable, ill-fitting or smelly, my costume was gorgeous, sumptuous – even stunning.  And it fit like the proverbial glove.  All thanks to the efforts of the geniuses who run Créations Face-á-Faces (visit their website at www.costume123.com) who provide a variety of period costumes for men, women and children.  Believe it or not, you can have a costume custom-designed to your specifications and measurements but not have to buy it.  Rent, wear and return your gorgeous outfit and it will simply become part of the collection for others in subsequent years.  As the official costume provider for the New France Festival, the talented seamstresses and designers create, alter and enhance a stunning collection of costumes that really does contain exactly the right thing for everyone – regardless of whether you’d rather be a milk maid or the lord of the manor.

Wearing my exquisite dress and twirling a matching parasol, I strolled the old cobblestone streets of the Basse-Ville, or lower city, listening to singers, watching costumed guests arrive by boat in the harbour to attend a 17th century style marriage ceremony in the square, and sampling the food of the day.  As my skirts swept the stones, I felt transported back in time.

And you can too!  Although the 2010 festivities are at an end, there’s 2011 (August 3-7) to plan for!  And now is the time to send in your measurements and make your reservations.  Organizers expect more than 255,000 participants to join in next year’s festivities so reserve your costume and your accommodations now!

Note:  while Quebec City is full of wonderful hotels and inns, there’s perhaps no more perfect place to stay while impersonating a character of the 17th century than the Chåteau Frontenac.  Reputedly one of the world’s most photographed hotels, and a star in the Fairmont chain, the Chateau is located just above the lower city, overlooking the St. Lawrence River and just steps from the Funiculaire de Vieux Québec – an essential means of getting up and down the steep hill between the upper and lower parts of the city – particularly when you’re wearing a long, full skirt!

For the latest information, visit www.nouvellefrance.qc.ca

Going Back To Find The Real Mazatlan

Dreams In The Sun