Home Off Beat Five incredible places carved out of rocks 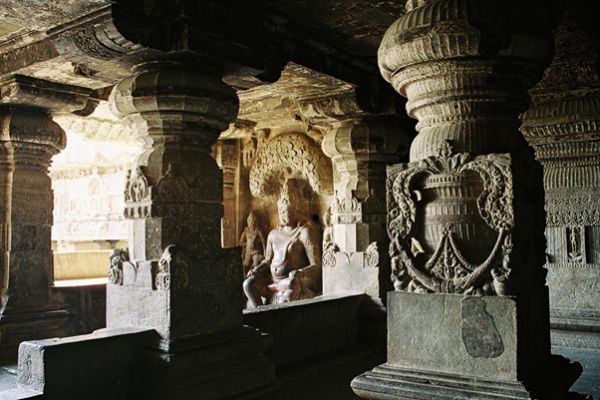 Nature has developed beautiful landscapes throughout the world that surprises us tremendously. However, not just nature, men too have created wonderful structures and changed natural landscapes with the sheer power of creativity and imagination. Rock craving and manmade cave structures have always been able to stun travelers with their magnificent beauty. There are some wonderful places created by craving rocks. Tourists from all over the world visit these places to appreciate the hard work of the ancient generations. In the following, you will find out all about the five most wonderful places that have been carved out of rocks around the world.

The Ellora cave temples were built in the 5th to 10th century. They bear the marks of the expertise of Indian ancient architects and their skills. It is a world heritage site visited by millions of travelers every year. The rock craving at Ellora is intricate and full of delicate nuances of different cultures. There are caves of Buddhist, Hindu and Jain religions. Each of the different religion’s caves has been decorated in unique ways. The Jain caves are full of wonderful ancient paintings that have been made using colorful rocks. Surprisingly the cave paintings have survived the ravages of time.

The Longmen Caves are also magnificent specimen of rock craving. You will find at least 100 thousand different statues and sculptures on the walls of this cave. All the statues are of either Buddha or his disciples. You have to travel to the Xianshan and Longmenshan mountains of China if you want to get a glimpse of the wonderful rock cravings. The statues have not been craved only inside the caves but also on the cliff face. Royal families, rich men and religious sects of China supported these rock cravers and artists. All the craving was done between 400 and 1100 AD but they are still as beautiful as they were at the time of the making.

As early as in the thirteenth century the wondrous Abu Simbel temples were built. The famous pharaoh Ramesses II had commissioned it to the expert constructors, artists and rock cravers. It must have been a very laborious task. The temple was built to show respect and pay tribute to the great pharaoh and his wife. The Aswan Dam would have flooded the whole Abu Simbel and ruined it forever if it was not shifted on top of an artificial hill using modern technologies in 1968. If you visit Egypt, do not miss the Abu Simbel temples. Its breathtaking beauty will remain as a lovely memory wit you forever.

The Nabataean people built an entire city out of rocks, which is known as Petra worldwide till date. This spectacular city of rocks was made in 312 BC. The buildings are all decorated very ornately and look fabulous. Some of the buildings demonstrate the influence of Greek architectural style. The arid region was made habitable by a complex system of cisterns that helped the residents get water for different purposes.

The Lycian people, who helped the Trojans fight the great Trojan War, carved cliffs and turned it into a tomb for themselves. It is located a little away from Dalyan in Turkey. If you visit this beautiful rock tomb then do not miss visiting the nearby ancient city Kaunos, well known for trading in the ancient ages.

The places craved on rocks are not only beautiful but also silent witnesses of the architectural changes that have occurred over ages. Some of them have beautiful religious statues and some others are decorated with still recognizable paintings.