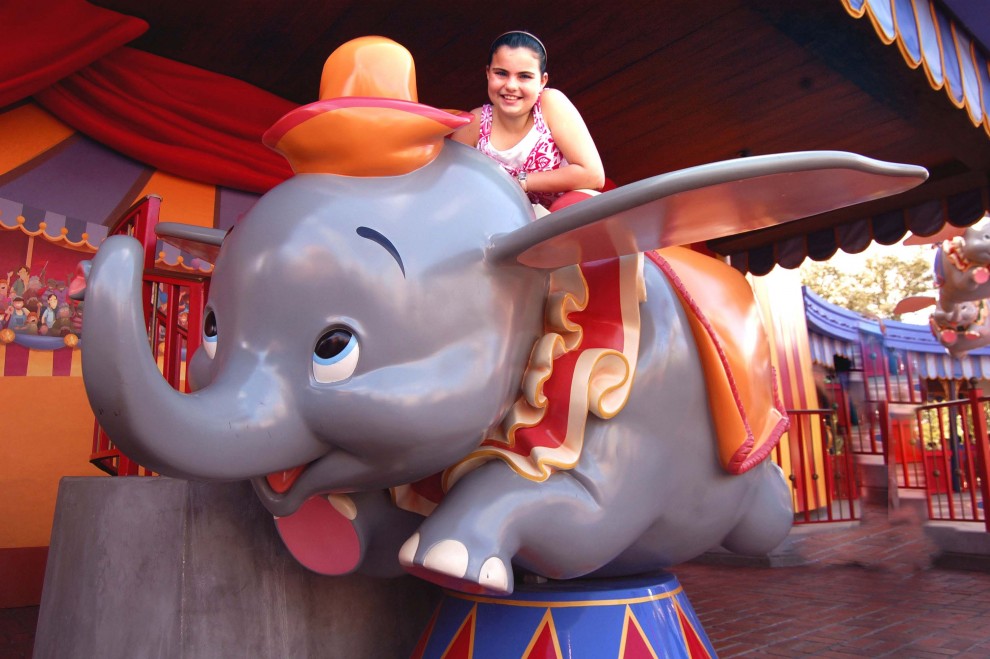 At age 11 my daughter is more of a roller coaster aficionado, but she’s still willing to do classic Disney for old time’s sake.
You see, Grace and I are at the New Fantasyland at Disney World in Florida and the rides there are tame by her tween sensibilities.
But Disney theme parks were born in the Fantasyland section of the Magic Kingdom and it’s where a doubling in size at Disney World is grabbing all the attention.
So we ride Dumbo the Flying Elephant, the Mad Tea Party from Alice in Wonderland, Enchanted Tales with Belle, Under the Sea Journey of the Little Mermaid, The Many Adventures of Winnie the Pooh and even the ‘baby’ roller coaster The Barnstormer.
In fact, in some cases we ride repeatedly using Disney’s Fast Pass system of bypassing line ups by getting a ticket to come back at a later time.
“I remember when I was a kid and these were my favourite rides,” Grace tells me with aplomb that only a 11-year-old can muster.
But no matter your age, a visit to the Magic Kingdom isn’t complete without Fantasyland.
“Fantasyland is the heart of Disney theme parks behind iconic Cinderella’s castle,” said Disney Parks & Resorts president Tom Staggs at grand opening ceremonies.
The ceremonies also featured song and dance numbers by season six American Idol winner Jordin Sparks and Disney’s cast of characters, including, of course, Mickey Mouse.
“It stays true to our legacy of helping families make memories that will last a lifetime,” added Staggs.
Yes, Staggs laid it on a little thick, but Grace and I do take his cue and make a trip down memory lane.
But it’s definitely different than last time we were there years earlier.
Half of the rides are new, the others expanded and improved and there’s the new Beauty and the Beast-themed Be Our Guest restaurant that’s fast service by day and oh-so-French fine dining by night.
And in a Magic Kingdom first, the restaurant serves beer and wine.
Serving booze at this family-oriented park is a big deal considering it had been dry since inception in 1971.
Another first at the park is a pager system at the twice-the-size Dumbo ride that’s wildly popular with the pre-schooler demographic and their parents.
If there’s a line up you are handed a pager as you enter so you can frolic at the indoor playground and not lose your place.
However, there’s a lot more to the Magic Kingdom than the New Fantasyland, as Grace points out.
“Time for roller coaster mania,” she says with a big smirk.
So it’s over to Frontierland for the adrenalin rides Big Thunder Mountain Railroad and Splash Mountain.
Then Tomorrowland for back-to-back-to-back screams on Space Mountain courtesy of shrewd use of the Fast Pass.
Thanks to our handy-dandy Park Hopper multi-day, multi-theme park admission tickets we also take in the most exhilarating rides at Animal Kingdom (Expedition Everest and Kali River Rapids); Hollywood Studios (Rock n Roller Coaster, Tower of Terror and Star Tours); and Epcot (the updated Test Track Powered by Chevrolet and Mission Space).
Expedition Everest and Rock n Roller Coaster were also thrill trifectas as we rode each three times in a row using again that irreplaceable Fast Pass.
Now an authority on all things coaster, Grace’s current top three ranking is Expedition Everest, Rock n Roller Coaster and a tie for Space Mountain and Tower of Terror.
All the Disney biggies tend to have one thing in common: fright and delight.
It’s achieved by hurling you, at least part of the time, through the pitch black forwards, backwards, up, down and sideways.
This tended to give us what we came to refer as the 4 o’clock roller coaster headache.
A nip back to our hotel—the new Art of Animation Resort where rooms resemble kitsch 1960s-era motel rooms a la Disney movie Cars—for a dip in the pool tended to lift the malaise.
That way it was possible to move onto a light dinner (you don’t want too much on your stomach) and more coasters and a night-capping fireworks show in one of the parks.
Information and deals on park passes and accommodation specifically for Canadians at DisneyWorld.ca.