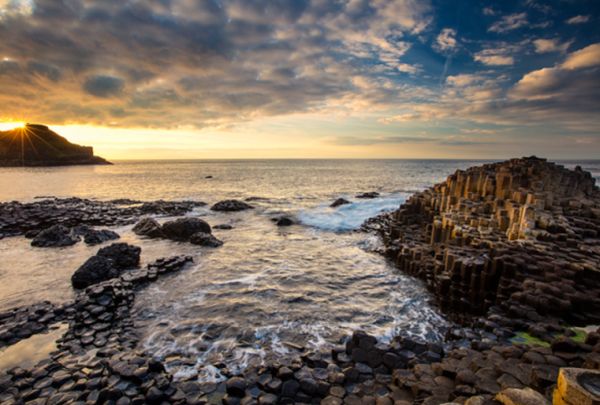 Make Sure To Visit Giant’s Causeway While In Europe

Giant’s Causeway doesn’t top a lot of destination spots lists, especially when considering Europe as a whole. It’s true that other places might have more human interest, telling the historical tale of some of history’s most colorful people and events. But this doesn’t mean that Giant’s Causeway is anything less than fascinating. For people who love the outdoors, love amazing sights, or just want to experience something utterly new, Giant’s Causeway is an unmissable destination.

Located in Northern Ireland, Giant’s Causeway is found in perhaps not the most likely place for a natural world wonder. But that’s where it lies, and lies impressively we might add. Giant’s Causeway is a massive basalt formation, the leftovers of a prehistoric volcanic event. In short, when molten basalt broke through the earth’s crust and tore its way to the surface of the land, it formed itself into pools all along the surface of what is now County Antrim.

While one part was cooling, other parts were still being covered by fresh lava. When all was said and done, the lava had piled up into hills and low-lying places. These gradually hardened into permanence, the result looking something like a desert and its dunes, made out of hard black rock. Another interesting result of the drastic change in temperature that Giant’s Causeway’s component parts underwent is that it resulted in dramatic cracking on the surface of the structure.

These cracks took the shape of hexagons (most of the time; four, five, seven, and eights sided shapes are sometimes seen), and they ran all the way into the earth. These became columns, nearly all hexagonal in shape when viewed from above, and more or less clustered together by size. No two columns are just alike, but because they are grouped together in like heights, the entire structure looks like it was designed by some kind of postmodern architectural genius. In reality, it was just nature on a normal day 60 million years ago.

Giant’s Causeway has a lot more history than that. It has seen Northern Ireland’s entire history, and a lot of long forgotten events before that. With Allen’s Tours, you’ll find experts who can answer any question you like about this most idiosyncratic of natural wonders. It’s the perfect tour out into nature that you could possibly take part in while visiting Belfast, and it’ll surely tie together your other holiday goals perfectly.

While Giant’s Causeway is somewhat difficult to explain sight unseen, it’s something that makes perfect sense once you’ve seen it. And once you’ve seen it, you’ll never forget it. People stand agog, finally coming to their senses to snap pictures and climb on the unlikely arrangements of rocky columns standing before their eyes. Bordering the water and a gloriously Irish landscape, it’s really something to behold, and not to be missed for anyone spending time in Europe. If you are anywhere near Northern Ireland, you simply have to find an excuse to see Giant’s Causeway with your own eyes.

Can You Handle A Road Trip As A Newly Qualified Driver?

How To Choose The Best Ski Resort For Your Family