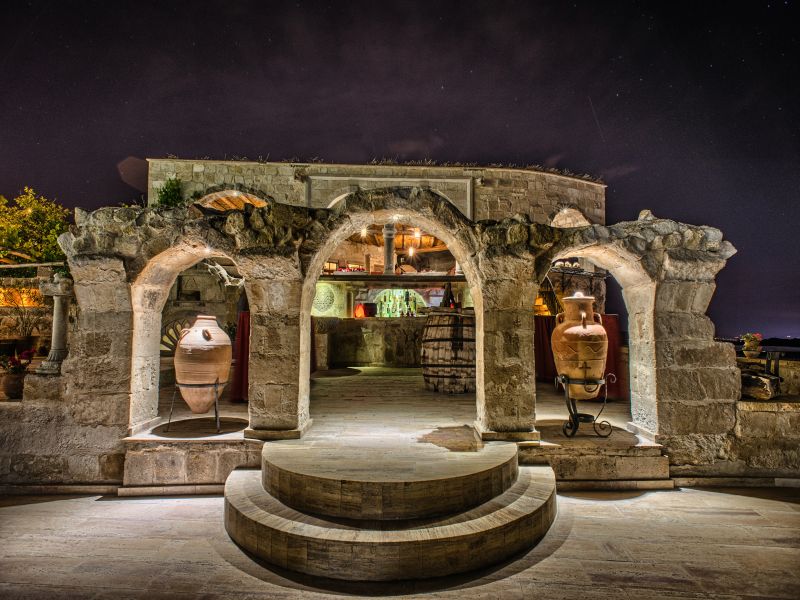 The best hotel to stay in Cappadocia – The Museum Hotel

Grading a hotel for an avid traveler like me, lucky enough to taste the grandeur of leading global travel accommodations, is a big dilemma. But with Museum Hotel, it is a different story altogether that left no room for hesitation in categorizing it as the best.

I had an opportunity early this April to visit the amazing city of Cappadocia in Turkey in the event of attending an important conference on health and wellness where dignitaries from all possible corners of the globe were present. Cappadocia was mesmerizing and the Museum hotel in which I had checked in was pure magic.

The name itself drives in a sheer charm. Staying in a museum? Yes, that was the absolute reality. The Museum Hotel is a way departure from our modern concept of what a luxury accommodation should be like. This being said, the very unique feature that ensorcelled me was the hotel ambience, a mind-boggling mix of the ancient world and striking modernity.

The founder of this legendary hotel Omer Tosun nurtures a keen interest in ancient history and heirlooms and antiques. He blended his passion intelligently that led to the innovative creation of this splendid luxury property amidst ruins.

Transforming the ancient crumbling caves to such a luxurious accommodation could be envisaged by some intelligent brains, and this hotel has proved that. Therefore, it has been rightly awarded the Best Luxury Boutique Hotel in Europe award.  The hotel has a distinction of entertaining eminent political dignitaries and business tycoons as well.

In Museum Hotel, I felt very much in a vibrant museum with a sea of priceless artifacts lying ubiquitous in every conceivable space right from the living rooms, bar lounges, reception area, on the terrace and inside the restaurant.

Cappadocia had been a home ground for several ancient civilizations. The Seljuks, the Romans, the Persians, the Ottomans, the Hittites and the wandering Tekeli tribesmen all have left their footprints in the region. The castles, stonework and the rock cut caves built by them are stunning evidences of flawless workmanship.

The beauty of the Museum hotel lies in its mind-blowing effort to restore the remains of an ancient civilization with painstaking finesse. It had been a very delicate project where the restoration effort ranged from the use of shovels, hand brooms and soil cores to brush and scalpels. The hotel has been highly successful in converting a large portion of the ancient civilization frozen in time into its own property sprawling over a large area.

I was greatly enchanted by the architectural plan of the Museum Hotel that brought forth a splendid environment. It made me feel as if I was living through an ancient European civilization with the inhabitants from the bygone era rushing past me.

Standing out in the crowd:

Quite different from other star hotels which offer the same standard facilities, Museum hotel brings out something innovative. Standard hotels no matter how much cozy they might be display almost the similar features and facilities which appear to be quite monotonous. But every feature of this hotel exhibits a striking departure from the conventional ones.

Firstly, the natural material that went into hotel construction is clay which is clean and environment friendly. I developed an instant liking for the all clay deportment around me. The beautiful hotel garden harvesting healthy produce through organic farming and other environmental friendly activities are rarely observed in any luxury accommodation around the world.

There were pigeons, peacocks and cute turtles roaming freely. That gave an impression of a wonderful little menagerie where beautiful flora and fauna existed in perfect harmony entertaining the guests. One cannot help appreciating the hotel’s efforts in promoting sustainable and responsible tourism adopting eco-friendly measures.

No two rooms are similar which I found quite intriguing. Each of the 30 rooms and suites of this hotel are unique in its kind. The Fountain room, Diwan room and waterfall room are all built around the theme of the name given to the room. When I stepped inside waterfall room, I felt a thunderous clatter of water running down the rocky walls.

The Sultan’s Cave imparted the real cave-dwelling feel. This special two chambered private room can be accessed only by walking through a private tunnel. Even the wine cellar attached to this room is quite striking where the wine bottles are stacked uniquely in holes of the rocky cave wall.

Since the hotel is cut inside rocky mountain, it gave me an impression of a reverse arrangement of floors. I entered the ground floor, reached the reception and again went downstairs into separate floor landings to get access to the rooms and suites. It was a kind of pleasant surprise!

The warm water swimming pool is beautifully constructed from the ancient ruins from where I had an access to breathtaking vista of panorama all around.  The position of this hotel offered a spectacular glimpse of Cappadocia. I was lucky to have an unconstrained stretch of awesome balloon rides right from my room itself.

Matching the uniqueness of the rooms, the food too was awesomely tasteful. The blending of authentic Turkish spices, herbs and aromas made the meat and vegetable dishes real zesty.

Breakfast was equally mouth-watering served in a wide range of taste and flavor. The products harvested from the hotel’s organic garden ensured the healthy aspect of the guests as well. Those eager to try their hand in cooking can have a good time in the cooking classes offered by the hotel.

The hotel’s customer service was amazing. It houses well-trained staffs. Their excellent etiquette and dedicated service delivery made me feel at home. In fact, what I asked for was provided pronto. The handpicked travel services of this hotel offered me ample opportunity to keep myself engaged in exciting activities that made my trip a memorable one.

Frankly speaking, the Museum hotel was an epitome of luxury, bliss and relaxation though all these elements were offered in a subtle manner having loads of marvels from antiquity.