Home Article This is Haiti!? 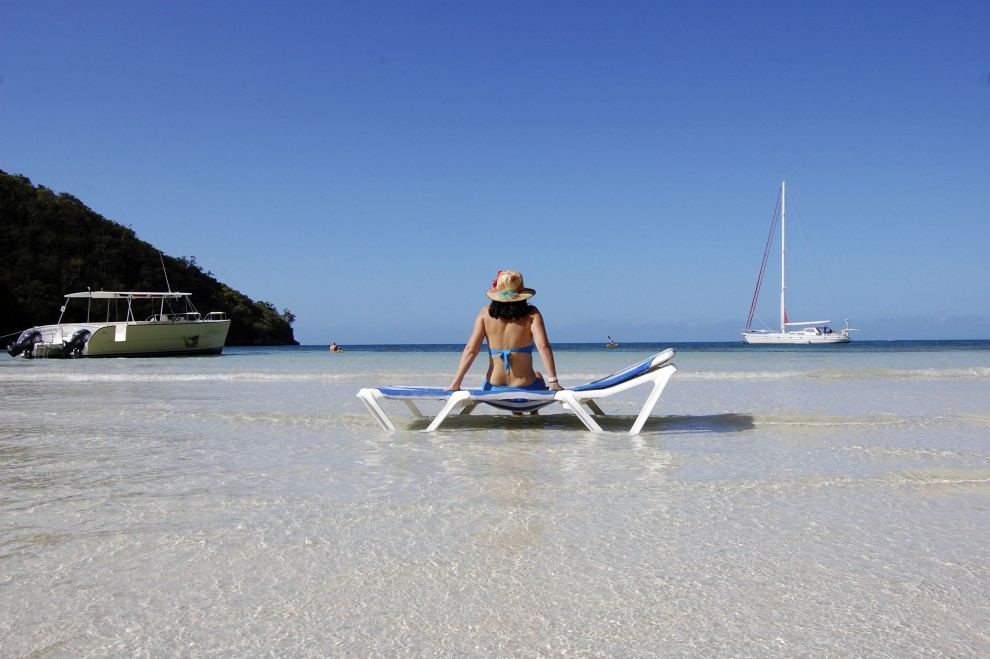 Tour guide Rosie flashes her brilliant chipped-tooth smile and asks if we want to see the real Haiti.
Of course we do.
So, our small group of just a dozen culture-and-sun-seekers piles aboard the modified catamaran La Belle Kreyol to glide over crystal clear Caribbean Sea to aptly-named Paradise Cove.
“This is Haiti today,” says  Rosie, in charming French-accented English with a Caribbean-Creole lilt.
“This is my Haiti.”
Rosie is so adamant because the stereotype of Haiti is of a poverty-stricken, earthquake-ruined and crime-ridden island nation.
True, Haiti was devastated by the 2010 earthquake that hit the south coast capital of Port-au-Prince.
The country remains the poorest in the Western Hemisphere.
And crime is rife in the slums.
But, Paradise Cove is on Haiti’s jungle north coast where the earthquake was hardly felt and tourists can enjoy themselves in the quaint villages and pristine beaches.
Plus, this outing is a safe excursion offered by Royal Caribbean Cruise Line from its private port in nearby Labadee.
Three generations of my family is on this trip of a lifetime to celebrate my parent’s 50th wedding anniversary while having fun in the sun.
So, after playing on Royal Caribbean’s private beach with the 3,600 other guests from the Liberty of the Seas mega-ship and relaxing in cabanas amid pillowed-splendor and billowing white curtains, we opt for some culture.
Rosie, which is short for Fleurema Roselic, loves Royal Caribbean and its extensive offerings at Labadee: think ziplines, jetskis, parasailing, restaurants and bars.
After all, Royal Caribbean has paid for a lot of infrastructure at Labadee and provides employment and economic benefits for locals and suppliers.
“But it’s not representative of Haiti,” she says.
“So follow me.”
And we’re glad we do.
La Belle Kreyol anchors in knee-deep translucent water and we get off the boat to splash to the white-sand beach.
Here the only amenities are blue-and-white-striped lounge chairs, a floating raft and a rustic bamboo bar with only four offerings—water, fruit punch, Haitian rum and the national beer, Prestige.
After downing the welcome fruit punch and sipping Prestiges while sunning ourselves, we conclude Paradise Cove has the formula just right.
But there’s more.
An easy hike with Rosie and sidekick Pierre Raymond, who is Caribbean-cool with his eyebrow ring and newspaper boy hat, through the mangroves reveals a typical Haitian village with fishermen and artisans at work.
My wife buys a straw hat and dark-wood jewelery box, we pick up some candy for the kids and we taste the yucca and coconut bread with homemade peanut butter prepared in the outdoor kitchens along the way.
We’re even serenaded by Toto, Rosnald and Da on the tambou drums.
The drums spark a conversation about voodoo, Haiti’s national religion.
Rosie says the drums are played during the Tuesday and Friday voodoo ceremonies where they also eat fish and drink beer.
“Seventy per cent of Haitians still practice voodoo,” she says nonchalantly.
“It can be used for good, it can be used for bad.”
More and more, multi-generations are choosing cruises for celebrations and family reunions as boomers become grandparents, parents become experience-seekers and kids become world travellers.
For instance, while the Liberty of the Seas was docked in Falthmouth, Jamaica, all 10 of us were game for the Dolphin Cove-Dunn’s River Falls excursion.
It’s an incredible two-in-one bucket list day to swim with dolphins and then climb through the many waterfalls and pools that make up Dunn’s River.
Both my 70-something parents and my 11-year-old daughter declare it the best day ever.
Back on the ship, dinners are elegant in the main dining room Botecelli and the specialty restaurant Portofino.
Even better, the family spends time together and no one has to plan, shop, cook or clean up.
Sea days are also family days and we spend ours taking full advantage of all of the Liberty of the Sea’s activities from pools, surfing and rock climbing to cupcake decorating, the figure skating and Saturday Night Fever musical shows and even high-stakes shuffleboard on the promenade deck.
Royal Caribbean’s five-night Western Caribbean getaway is round trip from Fort Lauderdale, Florida with stops in Haiti and Jamaica.
Check out RoyalCaribbean.com.