Home Off Beat Visit Jordan and Travel Through Time 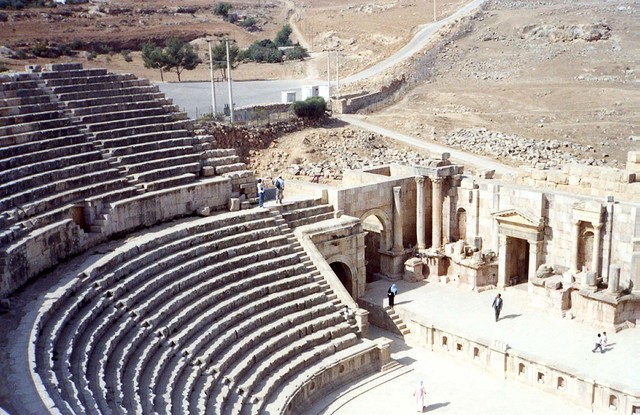 Visit Jordan and Travel Through Time

Transport yourself back in time and become immersed in the events of the Old Testament; experience life as a citizen of the Roman Empire; or discover the ancient wonders of the mysterious Nebataeans who built cavernous cities into sheer rock.

More than just magnificent Petra, Jordan is a land rich in history and unforgettable archeological sites. Since the dawn of civilization, Jordan has played an important role in trade between east and west because of its geographic location at the crossroads of Asia, Africa and Europe. It has been home to some of mankind’s earliest settlements and relics of many of the world’s great civilizations can still be found today.

Jordan played a vital role in Roman, Biblical, the early Islamic and Crusader periods. From the moment you arrive, you get a sense of the past. All around are remnants of civilizations long since relegated to the history books, yet they still remain, stamped into the very fabric of this amazing Kingdom and etched into the soul of the people who live here.

Jordan’s bustling capital of Amman offers a variety of historical sites from the Neolithic, Hellenistic, as well as late Roman to Arab Islamic periods. The Citadel is a good place to begin a tour of the archaeological sites of the city. It is the site of ancient Rabbath-Ammon and excavations have revealed numerous Roman, Byzantine and early Islamic remains. Located on a hill, it not only gives visitors a perspective of the city’s incredible history but also provides stunning views of downtown Amman. Amman’s history spans nine thousand years dating back to the Stone Age. It boasts one of the largest Neolithic settlements (c.6500 BC) ever discovered in the Middle East.

Part of the larger Great Rift Valley that runs from Turkey to east Africa, the Jordan Valley is a  historical and natural wonder formed by a series of geological upheavals several millions of years ago. The therapeutic water of the Dead Sea, combined with the valley’s fertile land and warm climate, have attracted people to live, hunt and farm in the area since the Stone Age. Over 200 archaeological sites have been discovered, but there are believed to be many more.

For Christians, this region inspires their faith. This is the place where God first spoke to Man. It is the Holy Land where God gave his Ten Commandments to Moses, where Job suffered and was rewarded for his faith, Where Jesus was baptized by John, and where Jacob wrestled with the angel of God. In the Book of Genesis, God refers to the Jordan River Valley around the Dead Sea, as the “Garden of the Lord”, and it is believed to be the location of the Garden of Eden. You can even visit the site where Jesus was Baptised.

Many of these sites and others in the region are also significant Holy places for Muslims, who can find a plethora of religious destinations that are important to the development of Islam, the religion followed by the majority of Jordanians today. One of the world’s most amazing places, the Jordan Valley is a dramatic, beautiful landscape, which at the Dead Sea, is over 410 metres (1,312 ft.) below sea level making it the lowest point on the face of the earth!

The ancient city of Petra is Jordan’s national treasure and by far its best known tourist attraction. Petra simply must be included in any visitor’s travel itinerary. Located about three hours south of Amman, the area is known to have been inhabited from as early as 7,000 to 6,500 BC.

Most of what can be seen at Petra today was built by the Nabataeans, a nomadic Arab people from Arabia who began to arrive and slowly settle in Petra at the end of the 6th century BC. By the 2nd century BC, Petra had become a huge city encompassing around ten square kilometres, and was the capital of the Nabataean Kingdom. Primarily farmers, the Nabataeans cultivated vines and olive trees and bred camels, sheep, goats and horses. They were skilled at water management and built a complex network of channels and cisterns to bring water from a plentiful source at Ain Musa several kilometres away.

One of the most well preserved Greco-Roman Cities in the world, Jerash is another must see tourist destination in Jordan. The ancient city of Jerash boasts an unbroken chain of human occupation dating back more than 6,500 years. Ancient Jerash was an open city of freestanding structures richly embellished with marble and granite. Its engineering was so advanced that large parts of the city still survive today. Much more has been painstakingly restored by archaeological teams from around the world.

Still not convinced that Jordan is the perfect place to enjoy your next holiday?  Check out these 10 great reasons to visit

Going Back To Find The Real Mazatlan

Dreams In The Sun