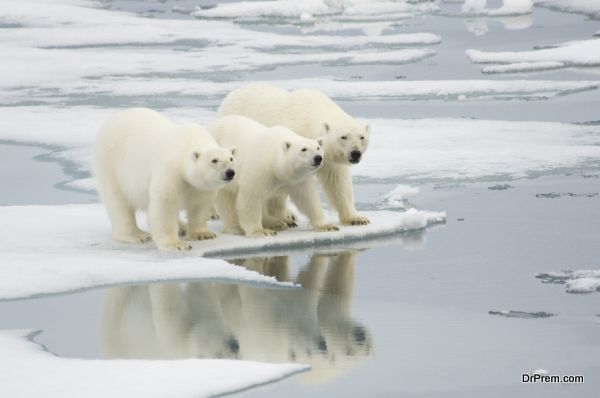 If you find yourself face-to-face with a polar bear in Churchill, Manitoba – what do you do?

“Don’t run and don’t play dead,” says Brad Josephs, a highly experienced naturalist and certified “bear junkie” who has been an expedition leader with Natural Habitat Adventures (www.nathab.com/polar-bear-tours) for six years and a brown bear guide in Alaska for nearly 11 years.  “If you act like prey, they’ll treat you like prey.  If you see a bear in town, walk calmly to the nearest car or building and go inside.  Then call Polar Bear Alert.”

That’s 675-BEAR, to get in touch with Polar Bear Alert: a team of conservation officers from Manitoba Conservation who are on-call 24 hours a day during peak polar bear season to deal with any bear issues in and around town – and boy, do they get busy.

Churchill’s peak polar bear season begins early October and continues through November.  During this time, over 1,000 polar bears congregate around the shores of the Hudson Bay as they wait for the ice to freeze so they can begin their hunting season.  This is the largest concentration of polar bears in the world at one time, giving this little town with a population of just over 800, the nickname: “Polar Bear Capital of the World.”

Polar bears use ice as a platform when hunting for seal, their primary food source.  Their incredible sense of smell allows them to smell seal from 20 miles away or through 3 ft. of ice or snow.  Incredible predators, the bears will sit on the ice above a seal’s breathing hole for hours, waiting for a seal to come to the surface for some air.  Polar bears are also known to hunt beluga whales which are also numerous in the area.  During the summer months in Churchill, you can see hundreds of beluga whales passing through the waters in Churchill – on some, you can see the scratches on their backs from polar bear claws.

When the ice begins to melt at the end of spring, the bears are forced back on shore for the duration of the summer.  Most hang out around Wapusk National Park while they wait for fall to come and the ice to freeze again.  The need for ice is the reason why the polar bear has become the poster symbol for global warming.  As global warming and climate change begin to effect the planet, the ice melts faster and forces the bears ashore for long periods.

Every year, thousands of visitors from all over the world visit Churchill for the rare opportunity to see these magnificent bears in their element – and this year, I was among them.  Photographers, travellers, adventurers, and eco-tourists alike make the trek northward for a glimpse of the bears.  Many come to see the bears in the wild before it’s too late.

With Brad, our trusty Natural Habitat Adventures’ expedition leader at the helm, we flew 2.5 hours from Winnipeg and arrived in Churchill on Halloween morning.  There are no roads in Churchill, so visitors are forced to either fly from Winnipeg with airlines like Calm Air (www.calmair.com) or Kivalliq Air (www.kivalliqair.com) who offer flights through Manitoba and Nunavut; or take the train with Via Rail (www.viarail.ca).  The train can take anywhere from 36 to 48 hours, depending on the conditions, but they offer a great passing view of the varying Manitoba environment.

Looking to book a trip to Churchill, Manitoba? Check out the tripatlas.com/new Trip Builder where you can request a quote from over 104,000 travel agents who are ready to offer you the best prices on your trip.

Book of travel tales inspired by journey of self-discovery