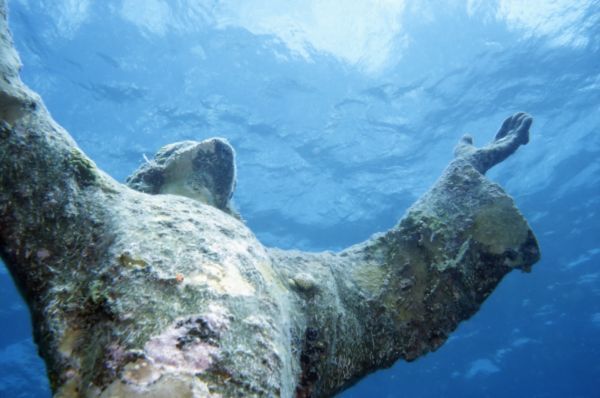 In your vacations you must have always visited a crowded city or a place full of historic monuments but this time, give these overcrowded place a break. Get away of these places and explore some ancient wrecked cities or some ship ruins just 15-20 feet below the surface of ocean. These calm places, free from travelers, cameras and pollution will surely give you some unique life time memorable experiences. Without any further bragging, have a look at some of the coolest underwater attractions.

Museo de Arte is an underwater sea museum created by a British artist Jason deCaires. These unique museum features more than 400 pieces made of concrete. The amazing thing about these sculptures is that the concrete used is pH neutral so they are not affected by the water. These all are sunk in National Marine Park of Cancun. Some unique sculptures in the collection are Terracotta Army- “Silent Evolution” and orange coral “Man of Fire”. Eventually the sea life and corals in the deep sea are transforming these masterpieces into living reefs giving them a real effect. To can reach here easily using scuba or via snorkel or glass bottomed boat.

Spread over 16 acres, Neptune Memorial Reef is the World’s largest man made reef. You may have never seen any cemetery that needs a PADI certification to pay your homage. The Neptune Society eventually got buried 50 foot under the ocean surface. It is located near Biscayne. On its entrance it consists of stone lions that guard the canopy. This whole place has a space of around 850 cremations. It is believed that the capacity will ultimately reach 125,000.

It wasn’t some curse or magic that undid the “Wickedest City on Earth” of 17th century; it was all about bad urban planning. Port Royal was once the hotbed of piracy in Caribbean. On June 7, 1962, when a high frequency earthquake struck this castle made on sand spit, the liquefaction forced 33 acres of streets and lands to sink. With depth up-to 40 feet, Port Royal is now World’s most nautical Archaeological Site.

In 1987, when a diver was after hammerhead sharks he saw something that just left him speechless. He discovered a vast temple under the China Sea. The temple had rock slabs which were carved in a pyramidal structure, some stone tools, and ancient walls with carvings on them. After all research, Japanese Archaeologists claimed it to be the Lost Continent of Dissenters Dynasty. They further added that this site is unique like basalt columns of Giant’s Causeway. You can never imagine how much this 80 foot deep place can fantasize you after you dive here.

As we move forward from Key Largo to Key West, you can easily witness the 120 miles long aggressive artificial reef chain. This shallow area consists of many fish filled reefs along with the ruins of 1700s Spanish galleons. Among these sites, some famous are, 524 foot long missile tracker with its vast radar dishes. This missile tracker belonged to USS Vandenberg. As you move further, you will encounter a full Boeing 727 jetliner submerged. This jetliner was sunk in Biscayne Bay in somewhere around 1993. The main cause behind its wreckage was believed to be tropical storm. In 2010, divers discovered its multiple pieces. These wrecks are not common sight seeing in our day to day life, so it is worth visiting these sites.

Summary: If you are bored of seeing fish and coral reefs while scuba diving then have a look at these amazing and eye catching wrecks that were either caused by natural calamity or by some man-made activities.