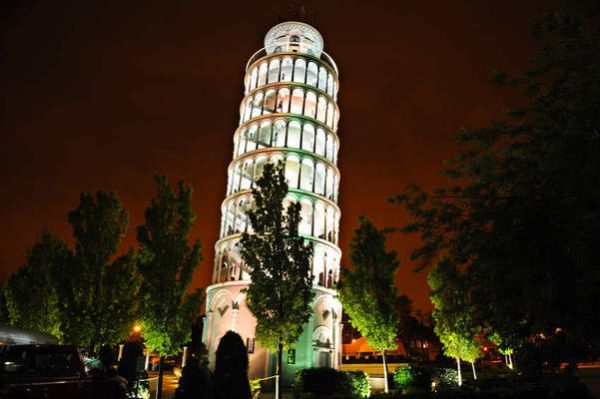 When you drive on a long highway then all you can see barren land or empty fields. However, if you travel in city and roll down your wind screen then only thing that you can feel is the hassle of city people and cars honking. What if you come across some strange objects on your roadside with no-one around? These strange roadside objects will surely grab your attention and will force you to decrease your velocity and take a look at them. Have a look at some of the strangest and most weird roadside attractions that will ever come across.

If have you have ever visited the U.S. 90 stretch then you may know that how difficult it is to find a gas station there. Now, imagine a place where there is no sign of human in-habitation and no gas station for miles, then how will you react to see a Prada Store in the middle of nowhere. Yes, we are talking about Prada Store located some 150 miles away from El Paso on U.S. 90. Built in 2005, by Michael Elmgreen and Ingar with blessing of Miuccia Prada, this store is only a roadside attraction with its door permanently closed. To be precise, the store has six purses and 20 left foot shoes.

In 1953, Frank Stoeber starting building a Twine ball in his own basement. His ultimate aim was to break the record of Johnson in Darwin who winded a 12 foot wide Twine ball. Until his death in 1974, Frank worked tirelessly and managed to build a Twine ball 11 foot wide and could not make it. Since then, every year in Twineathon, tourists and residents visit Cawker city to contribute to this giant Stoeber Twine ball. With all their contribution and efforts this giant ball is now 40 feet in diameter and weighs around 9 tons.

Built in 1934, by industrialist Robert Ilg, this Leaning Tower of Niles is a masterpiece replica of Leaning Tower of Pisa. This water tower is a true example of excellence. This tower stands tall in front of Touhy Avenue on two pools. This place is mainly used as company’s recreational park.

Have you ever seen around 2000 wheel rims at one place? In 1982, George Gottbreht got an idea to use all the wheel rims he found and constructed a large 18 foot tall turtle. This amazing architecture will surely leave you speechless. The turtle is a tribute to Turtle Mountain State Park. It comprises of a motel, restaurant and a store. Sometimes people mistook it as a lizard so George made some changes and a motor was fir so as to move the head of the turtle in y motion.

You may have never seen such strange roadside attraction. In 1980s a couple came to spend some time in Middlegate. But soon they got into some arguments and the girl threatened to walk out. As so soon as she said that, the boy threw her shoes on the nearby Cottonwood tree. The couple made some amends and as soon as they had their first baby, they came here to hang baby shoes on this tree. Since then the belief is being followed and every year hundreds of couples make wishes and come to hand shoes on this tree. Today, this tree is full of thousands of pairs of shoes or footwear, just like cherries on a tree.

Summary:Have you ever seen something very strange on roadside that caught up your attention and forced you to stop and look? If not, then have a look at these amazing roadside creations.

Strangest Statues that will amaze you