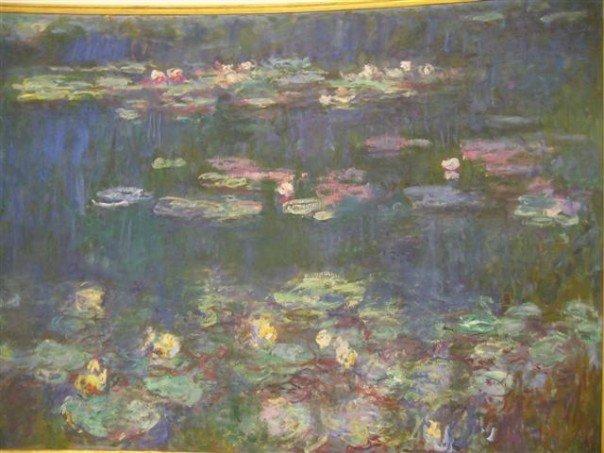 Claude Monet is having a renaissance.  After 30 years, a monograph of the “prince”  of Impressionist Art will be on display at the Grand Palais in Paris, from September 22, 2010 until January 24, 2011.   170 canvasses and drawings will not only show Monet’s greatest works (for instance, The Houses of Parliament smothered in fog), but also an interior perspective that many fans have not seen before, amassed from private collections globally.   That being said, this exhibition is one of the few places where you can discover Monet’s masterpieces.  Here are a few more discoveries on the quest for Monet’s art:

The museum (as of 1934) was a former hunting lodge brought by Jules Marmottan in 1882.  In 1966, Monet’s second son, Michel donated over 100 of his father’s canvasses, endowing this musuem to the largest collection of Monet paintings in the world, including “Impressionist Sunrise,” the inspiration for the moniker of the Impressionist movement.  Refusing to participate in the Grand Palais exhibit, Musée Marmottan-Monet will be having its own retrospective entitled La Collection Intime, a collection of 100 paintings, 29 drawings and other momentos from his life bequeathed to Michel.  The exhibition takes place from October 6, 2010 to February 20, 2011, overlapping with the Grand Palais exhibit; otherwise, an ideal time to get your Monet fix.

Built in 1852 to house an orange grove, the Orangerie was used to billet soldiers on leave from the trenches during World War I. After the armistice of Nov. 11, 1918, the French prime minister, Georges Clemenceau, invited Claude Monet to display his large-format collection, “Nympheas”, there.  This collection is special, not only because of the sheer size of the paintings – each painting is six and a half feet tall and measures 298 1/2 feet wide if lined up side by side – but also because they are presented on curved walls in an oval room,  giving each paining a unique dimension.  Four nympheas  canvasses presented in one gallery represent sunrise; four nympheas  canvasses in the other gallery evoke dusk. Combined with a visit to the Jeu De Paume and a picnic or walk through the Jardin de Tuleries or a few hours in The Louvre marks the essence of a magical day in Paris.

This former Beaux-Arts train station houses one of the best collections of Impressionist art in the world, including Monet’s works which have currently been transferred to the Grand Palais for their exhibition.  Currently undergoing renovation and behind schedule in opening in late September 2010, the museum hopes to display the Impressionist collection on the 5th floor under a glass canopy, and Post-Impressionism on the middle level.  The website states that there will be a better display of the artworks and larger exhibition areas to ease the flow of the growing number of tourists (over 3 million tourists visited Musée D’Orsay in 2009).  The Museum also offers spectacular views of the city from the balcony near the cafe.

Bonus: should you hold onto your ticket,  you get reduced rates at the Gustave Moreau National Museum and the Palais Garnier (Paris National Opera) unguided.

I highly recommend getting the Paris Museum Pass (http://en.parismuseumpass.com), which enables access to the Musée D’Orsay and L’Orangerie, among other popular museums such as Musée  Rodin (in close proximity to Musée Marmottan-Monet) and The Louvre,, where you can buy the pass.  The pass is available in two, four or six day packages.

10 Surf Camps Around The World