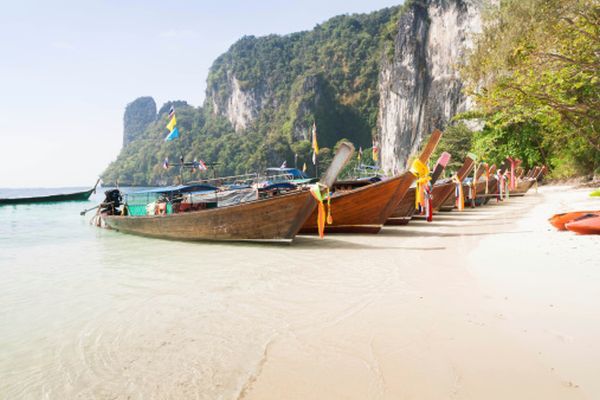 Five best beaches around the world shown in movie

The moviemakers send their employees around the world and do their research for finding the best beaches for shooting. Have you ever desired to visit one of the picture perfect beaches showcased in the movies? It is possible for any traveler to visit some of the exquisite looking beaches of the world. All you need is correct information about the beautiful beaches around the world, which have featured in movies or at least look as perfect as the beaches shown in movies. In the following, we have listed some of the best beaches used in famous flicks, so that beach lovers can find their way to these famous seaside tourist spots.

The Phi Phi Leh is one of the most famous beaches of Thailand. Do you remember the 2000 flick named The Beach? This beautiful movie depicts the eternal quest of backpackers for idyllic spots preserved from tourism and human presence. The Phi Phi Leh is one of the Thai beaches that have been preserved from ruthless tourists. The uncorrupted sandy landscape offers solace to the sore hearts of urban dwellers. The best scene of the movie was the moment when Leonardo DiCaprio rises from the water into a spectacular cove in this beach after swimming underwater for a long time. It is a great beach for the lovers of snorkeling. There are ribbons of coral reef and the white sand is soft. It is a piece of heaven on earth.

Mamma Mia is one of the sweetest musicals Hollywood has produced. It is a favorite of many. The 2008 movie was shot in the Kastani Beach of Skopelos Island. The actor Sophie is trying her best to find out who her real father is before she gets married. The most memorable sequence including the beach is the sexy song ‘Does your mother know’ by Tanya aka Christine Baranski. The cerulean colored sea will astound you for sure. The sea here is not good for swimming but the soft sand is good for picnics. Climb the surrounding hill to reach the lovely monastery on top.

The Devil’s Beach was used in the famous adult flick Blue Lagoon. With a diabolical yet innocent plot, the movie own millions of hearts. Brooke Shields won the limelight after she portrayed the role of the lead female character of Blue Lagoon with perfection. Even after 30 years the filming of Blue Lagoon the Devil’s Beach spread over 500 acre land space looks as idyllic as before.

The Leo Carrillo Beach was used in the original Karate Kid movie released in 1984. It is a world famous movie loved by many. The best scene of the movie that features the beach is when the karate teacher Pat Morita practices the crane move with his protégé. The Pacific water is seen gleaming in the background. This beach is situated some 28 miles northwest of the Malibu beach.

The teen favorite Twilight was shot in this beach. Most of the movie was filmed in a rainy Washington state but the beach scenes were done at Indian Beach. The headlands, sea stacks and spruce forest surrounding this lovely beach makes it a great place for hanging out. The best scene shot at this place is the revelation of the identity of Edward’s clan by the werewolf friend of the actress, Bella.

We all want to visit some of the famous beaches used in movies, as these secluded beaches offer a great experience to the travelers.