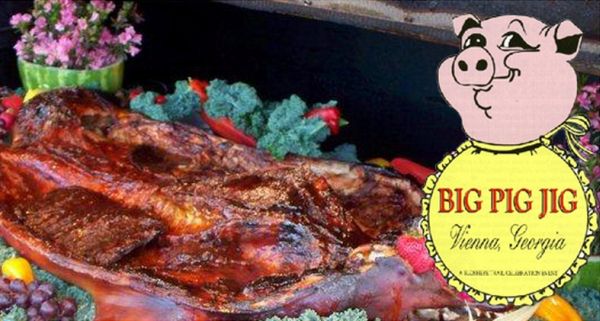 All you need to know about Big Pig Jig

Millions of people love to eat pork and many of them even love to cook it in their own unique style. The primitive men burnt meat and ate it. For them food was only a requirement but the modern men know how to savor it well. The variety of foods and cooking methods prove this true. To explore the culinary skills and take cooking to new level of excellence many cooking competitions are organized all over the world. Pork meat offers variety and can be used for cooking different types of dishes.

The Big Pig Jig is one of the most famous barbecue cooking competitions organized in Vienna, Georgia. It is famous because no other barbecue-cooking contest is as grand and well organized as this one. Every year people from different parts of the south participate in this cooking contest. It has now become a tourist attraction and people flock to the ground of the jig from all over the world during the contest.

The story of the origination of the Big Pig Jig is quite funny. A group of gourmet barbecue cooks fought among each other regarding who is the best cook. They decided to start a cooking contest by the name Big Pig Jig in 1982. The Big Pig Jig started as a part of one of the most popular arts and crafts fair in the town. This fair was partly organized by the county’s livestock association annual hog show. What started as a feud among culinary friends turned out to be a huge success and got national attention. At present, the Big Pig Jig is a major annual event of Georgia. There is no scarcity of pork lovers and barbecue enthusiasts in our world and for them this cooking competition is a great attraction.

The American Bus Association has declared it one of the hundred top festivals of entire America twice. Many other popular festivals have not been able to earn such a huge honor. The Southeast Tourism society has kept this festival thrice in the list of twenty top events held in the south. It has more than twenty-five different prestigious awards for being entertaining and magnificent. Participating in this festival has become a family tradition for hundreds of people. Food is a necessity of every human being and good food helps us bond with each other. The culinary experiments of some of the best barbecue cooks of Georgia has enthused many budding cooks into trying new ways of cooking pork.

Apart from the barbecue competition, the present day Big Pig Jig comprises of art contest, 5k run, Miss Big Pig Jig Scholarship Pageant and a fun parade. Many local vendors sell their merchandise at this festival and a DJ is hired for keeping the crowd happy and grooving. Many other cooking festivals have been organized after the Big Pig Jig became popular but none could reach its height and stature. According to the rules of the competition only a pig that weighs 85 pounds or more before the head, tail and other parts are chopped off is allowed. The pig has to be cooked completely on a single grill surface. Marinated, injected or pre-cooked meat is not allowed for barbecuing. Charcoal or any type of wood can be used for fire.

Big Pig Jig is a fun cooking contest where you can enjoy other programs and participate if you wish. It started as a small competition between rival barbecue cooks but now it is recognized by the most well reputed national tourism organizations.

Top wine destinations to visit in 2014