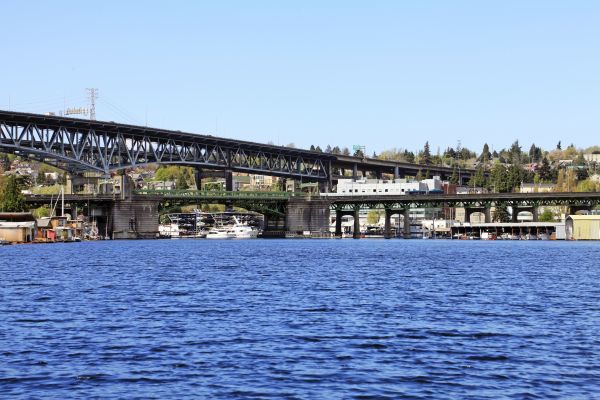 Have you ever wondered about the technical details of a bridge you are crossing? Details like life span, steadiness of the bridge ever crossed your mind? Let us have a look at some of the most dangerous bridges in America that you might have crossed. These bridges are deteriorating day by day. Here is the list of America’s most ageing and dangerous bridges that you cross. These are judged by their sufficiency rating (SR): percentage ranging from 0 (worst) to 100 (best).

Ever since it was made in 1951, this double deck roadway near Back Bay is been a problem for everyone. The main difficulty this bridge is facing is the thickness of the upper pavement. The upper part is so thick that the total weight of this part along with vehicles going puts a lot of strain and pressure on the steel bars beneath it. A lot of money is spent in 2012 and 2013 to facelift this problem. These repair works are just temporary ways to extend its life to some years.

In 1933 this three and a half mile long steel structure was made. At that time Herbert Hoover was the president. During its construction time in 1933, it was estimated that average daily traffic volume crossing the bridge will be around 5,500 vehicles only. After nearly 8 decades, the daily traffic crossing the bridge has increased to more than 10 times. This steel and concrete structure is now struck by rust and is among the most dangerous bridges in America. This 550 foot long bridge stands at a height of 135 feet above the Passaic River. Till 2016 $1 billion will be sanctioned to give few more years to this ageing bridge.

Constructed in 1940, Mill Basin is one and only drawbridge situated on New York’s Belt Parkway. This ageing bridge has an outdated design and is often a main point of frustration of locals and everybody who is crossing it. In July 2012, this drawbridge struck for more than an hour in the up position. This led to a huge amount of traffic jam. To deal with the limitations of the bridge, another 60 foot tall bridge is being constructed to replace this outdated Mill Basin Bridge. This construction should complete by 2017, until then the traffic has to use the old bridge.

Built in August, 1963, this 2,310 meters long ageing bridge is standing at a height of 200 feet above Lake Washington. With a length of one and a half mile, this is the longest floating bridge across the world. Once a marvel of its time, after decades of construction, this bridge has now taken a toll. Several repairing assignments have been done on this bridge. Till today more than 30,000 feet of cracks have been repaired in this concrete structure. The old design could not withstand high speed windstorms, so it is closed during that time. To counter its limitations, a new replacement is under construction to build stronger and wide bridge, which will be the new longest floating bridge across the world. This will be the new engineering marvel.

Summary: You may have crossed many bridges without noticing its technical specs and age. Have a look at these ageing marvels that will force you to think twice before crossing them