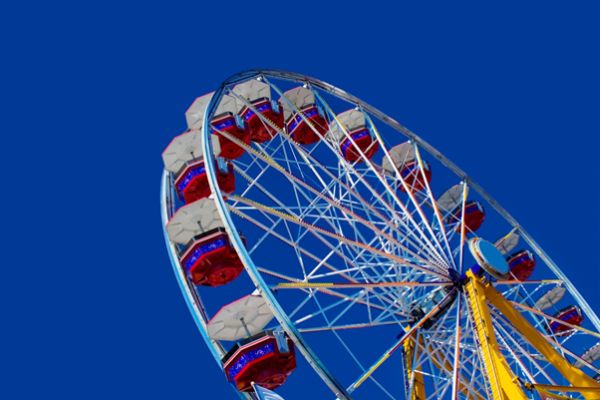 To make the four-hundredth year of America’s discovery memorable, the first Ferris wheel was built in Chicago at the World’s Columbian Exposition. George Washington Gale Ferris Junior gifted the world its first ever Ferris wheel and then the Ferris wheel became a part of the carnivals, fairs and amusement parks in different countries. They give us the amazing sensation of whirling up and down without any control over our motions. Ferris wheels are loved by people of all ages who are not afraid of height. Ferris wheels keep entertaining people all year round in some places around the world. In this article, we have listed some unique and loved Ferris wheels. This list is not just based on the height and capacity of the wheels but also takes into consideration their effect on the environment, historical significance and other important features.

The Singapore Flyer was built in the year 2008 and it is the tallest Ferris wheel ever. It is about 541 feet high, almost the size of a small mountain. Due to the suggestions of Feng Shui experts, this wheel turns clockwise and faces the marina. There are 28 air-conditioned capsules and each of these can carry 28 passengers. The luxurious capsules have champagne service, ramps and restrooms. The very first passengers had to buy tickets worth $8,888 Singapore Dollars. A ride in this iconic Ferris wheel can give you a memory that will last for a lifetime.

Tokyo Dome City is a huge and magnificent shopping complex in Tokyo, Japan, that provides lots of entertainment to the shoppers. The Big-O is a part of the shopping complex. It is famous because there are no axels or spokes for keeping it on place, just two side supports that look quite similar to chopsticks. The thunder Dolphin roller coaster goes through the open middle of this Ferris wheel and makes the experience even more exciting for the riders.

The major attraction of the Texas State Fair is the famous Ferris wheel called Texas Star. Known as the tallest Ferris wheel in the northern parts of America, the twenty-one storey high Texas Star was built in 1985. Eighteen people have to maneuver it during people are riding it. There are 44 gondolas and each of them can carry six people at a time. Before 2008, it used to have around 16,000 incandescent lights for illumination but now it uses only LED lights for conserving energy. The Teas State Fair gets more than 3 million visitors a year and adds a substantial $300 million dollars to the state’s economy. Along with the amazing Ferris wheel ride, you can also have some fun crispy foods like deep fried ores, butter, Twinkies and beer.

The third tallest Ferris wheel of the world is the London Eye that has become an icon of London and often considered the best tourist sites of the city. It is 443 ft tall and offers a splendid view of the North Bank of the Thames River. Tony Blair inaugurated the London Eye on the New Year’s Eve of 1999.

The Tianjin Eye may not be the oldest, greatest or tallest Ferris wheel in the world but it has made to this list because of its position. It has been built on the busy bridge over the Hai River in China. Measuring 390 ft in height, this Ferris wheel can carry 770 people for an hour non-stop in its 48 capsules.

The Ferris wheels have always been a source of joy and give enjoyment and excitement to kids and adults all over the world. They also contribute in boosting the economy of different states and regions.