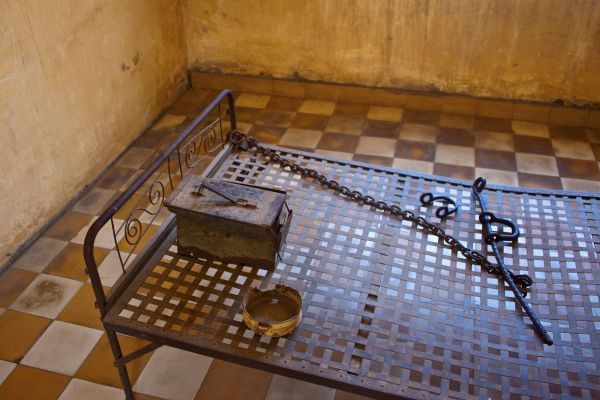 You think you are brave enough to visit scary places? If you think so then have a look at the creepiest places that will shiver you and where only bones will be in you line of sight. The place consists of some creepiest objects like torture devices, skull crackers and many more. Here is the list of creepiest attractions that will surely give you a shivering experience.

If you are ever visiting Royal Church of St. Francis then you will amazed by picturesque location of the Evora, a town of Portuguese. But don’t be fooled by the external beauty of this church. Inside this there is a whole different world. Inside this church there is Capela dos Ossos, also known as Chapel of Bones. In the 16th century, there was very less space to bury the dead. So, the monks moved more than 5,000 corpses into short on space chapel. After this they decorated the space with these corpses’ bones.

Creepiest Attraction: Corpses of a man and a young child, hanged from their noses.

If you are strong hearted and want to have some different and creepy experience then do visit the Torture Museum of Amsterdam. This small and disgusting museum witnesses some cruel tortures in the history that are surely not for the squeamish. Those who like to see examples of brutality can have a look at these objects. These include “Skull cracker”, the most efficient way of killing by guillotine and limb dislocating rack.

Creepiest Attraction: There are many disturbing objects and corpses including that of a naked man hung by his ankles. It seems that the man is hung like a wishbone, split in half lengthwise.

The Museum of Death, Hollywood

The Museum of Death in Hollywood is a stomach upsetting place for all weak hearted. This place is a house of murders, dismemberment, and collection of various arts of serial killers. It showcases pictures of some of the worst and horrific accidents and some famous crime scene areas.

Creepiest Attraction: If you want to have really horrific experiences then try its self-guided tour of around 1 hour. It will show you some creepiest and disgusting autopsies and some real death footage.

Next on the top creepiest list is the Museo de las museum of Mexico. This Guanajuato museum comprises of around 111 preserved mummies that were found and dug in Santa Paula Pantheon somewhere between 1865 and 1989. Unique thing about these preserved mummies is their facial expressions. Some are really scary and appears to be shouting and saying “NO!”. Their clenched fists protruding from their torn clothes depict the stories they have suffered. You can compare it to a real life prom room of Zombies.

Creepiest Attraction: One section that will really scare you is the small baby mummies’ section. These babies are dressed in traditional clothes so as to show them like “Little Angels”.

You must have heard of Palermo-the Capital of Sicily as a birthplace of many famous mafias. But the city is not famous just for mob hits and riots. Beneath the real riots and hits, there is a total different world containing around 8,000 embalmed dead bodies. Creepiest and scariest thing about these bodies is that these are all dressed in their finest funeral dresses. After exploring more will have a hellish experience by looking at these monks, poets and folks. These bodies are preserved here for more than 5 centuries.

Creepiest Attraction: Among all the creepy bodies, one body is miraculously preserved. This body is of a two year old child named as Rosalia Lombardo which died in 1920. It is famously known as “Sleeping Beauty”.

Summary: If you are tired of seeing scenic beauty and want to have a totally different and creepy experience the do visit these hellish places that will surely shiver you.