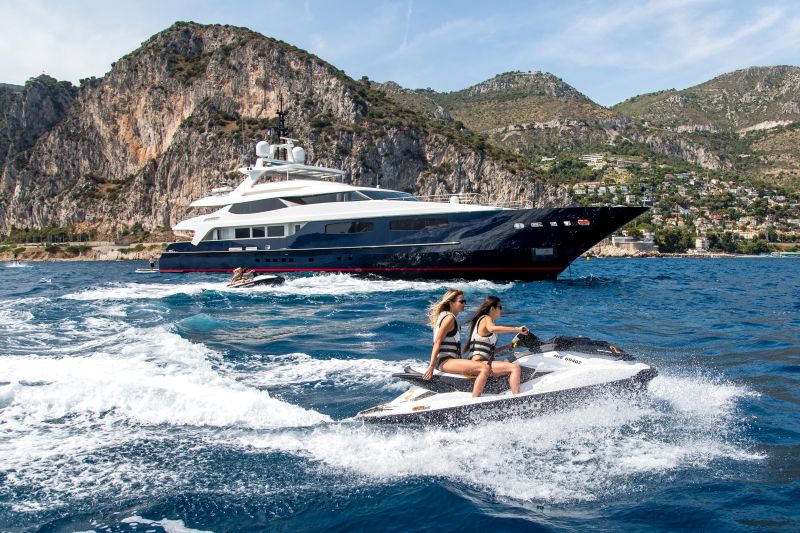 With the summer months fast approaching, the conditions for yachting are transforming in the West Mediterranean: inviting sunshine warms the crystalline waters, the most exclusive of beach clubs and restaurants open their doors once more, and the cultural façades of coastal destinations across Europe are beginning blossom. The ports of France, Italy, Spain, Monaco, and beyond prepare for an influx of avid seafarers, as growing numbers of West Mediterranean yacht charters affirm the popularity of this celebrated cruising ground. In eager anticipation of the upcoming yachting season, we’ve compiled a dream itinerary for a weeklong cruise around the Italian coast, where spectacular destinations are enriched by a fascinating heritage and an enchanting culture.

With an incomparable sense of charm, awe-inspiring cliffs that are crowned with groves of lemon trees, and reliably great weather, it is little wonder that the nobility of ancient Rome chose the Amalfi Coast as their weekend playground. This scenic region allures seafaring visitors with its sense of romanticism and its promise of a memorable experience; take advantage of the freedom a luxury yacht charter allows by exploring some of the most beautiful coastal towns on the Amalfi Coast.

Begin your adventure in Atrani, a coastal town with an abundance of charisma. With less than 1,000 residents inhabiting an area of just 0.12km2, Atrani is the most densely populated community in Italy. But what it lacks in space, it more than makes up for in beauty. Nestled between cliffs, the approach by sea is handsomely dramatic. The one-time crowning place of the ruling Doge, the town is characterised by winding streets, ancient stairways, stunning churches, and sun-filled piazzas.

The region’s eponymous town is a stone’s throw from Atrani. Still echoing the classic Italian glamour of the 1920s and 30s, when the city’s popularity with the elite of Golden-age Hollywood cemented Amalfi on the map of must-visit places in the Western Mediterranean, the popular destination is the perfect stop off place for a hearty Italian lunch. Finish your meal with a sip of the region’s famed Limoncello, made from the local lemons, which are famous throughout the Mediterranean. Once a maritime superpower, Amalfi is a UNESCO World Heritage site. Its Byzantine and Mediaeval architecture never fails to astound.

One of the most photogenic seaside towns in the Mediterranean, Positano delights visitors with her stunning rainbow of buildings, perched on the cliff’s edge. Locals are all too happy to share romantic tales of the rise of Positano, from a deprived fishing village to popular tourist resort, where The Rolling Stones even penned ‘Midnight Rambler’ in one of the local cafes. Grand Beach is the place to be seen, made famous by being the first to import the Bikini from France in the 1960s.

The Emperor Augustus chose the Isle of Capri to be the location of his sumptuous summer villa (the foundation of which can still be viewed) due to the island’s favourable location just off the coast of the Italian mainland. Her verdant hills, colourful houses and fishing boats, set against the backdrop of an emerald sea, makes this one of the most beautiful locations in the Western Mediterranean. Indeed, her beauty has been celebrated for over 2,000 years. The Blue Lagoon is a must-visit; visiting Roman bathers, who were dazzled by the enigmatically glittering waters, once enjoyed exploring the area’s limestone grottos.

In the C19th/20th, Sorrento became a favourite stop-off point during the ‘Grand Tour’ of travelling noble gentleman, with visitors like Byron, Keats, Wagner and Nietzsche enjoying the town’s cool climate and beautiful nature. Overlooking the Bay of Naples, famed for the eruption of the imposing Mt. Vesuvius in 79 A.D., the town is filled with luxurious hotels and restaurants, interspersed with beautiful historic buildings.

A superyacht for the Occasion

M/Y MISCHIEF is the perfect vessel on which to explore the West Mediterranean. The 54.0m Baglietto superyacht is available to charter from EUR 295,000/week. Savings of up to 20% are currently being offered between 1st and 17th March. With a distinctive blue hull and sleek exterior styling, M/Y MISCHIEF is a sight to behold. Her chic interiors were extensively refitted in 2015/2016 and accommodate up to 12 guests in six luxurious staterooms. Her special features include a vast array of water toys, a Jacuzzi on the sun deck, and an inflatable pontoon.

Alternatively, navigate the waters between each stop-off point on the innovative M/Y BLACKCAT 50, a 50.44m catamaran project for sale. Constructed of carbon fibre, she will be able to hit speeds of up to 30kts, making her one of the fastest sailing vessels on the water. Revel in the stunning scenery of the Amalfi Coast on your own private floating island, whose 620m2 exterior space and 320m2 interior allow for cruising in ultimate comfort and luxury.